Sorry for the lag in updates, but I have actually been surprisingly busy! I'm midway through a fun little project (that's bigger than intended, as all good projects are): merch suitcase 2.0! Here's a sneak peek at some of the progress: 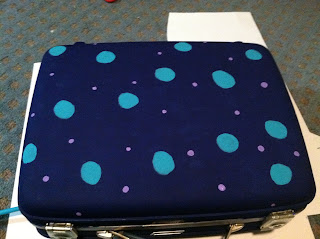 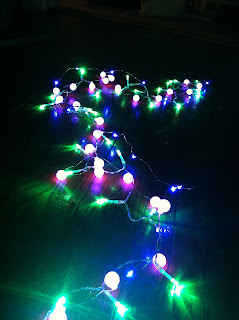 So there's that fun little art project. But the much bigger deal is that I've been recording quite a bit this month - I've laid down guitar and vocals on 12 of the 15 tracks for the next album, "Mean Girl Blues" already. I've also got the final recording of the cat-themed rap song (see last blog post for clarification). Two of the songs are previously unheard for the most part, since I play piano instead of guitar on them. And 2 others (also unreleased) are real bluesy old scratch track guitar recordings that I thought would be cool to throw in the mix - these I decided not to re-record, since the magic is truly in the old recordings themselves. You'll see. This damn thing might actually be finished this year. I did not see that coming, dudes. The hard part now is getting everyone else to record their parts - gonna be a few friends filling out the sound on this one, including my ever-sassy back-up band, the Terrible 2s.

I also just bagged another monthly gig in south city STL, 3rd Wednesdays at Pops Blue Moon. It's a cool little place, very cozy and friendly, music every night, and cheap drinks. My kind of place, for sure. That starts in May on the 15th, with Mt. Thelonious and the Psychedelic Psychonauts. I'll have the T2 backing me up on that one - gonna be a great show. It's a 21+ bar and there'll be a $3 cover, if you're in the area.

Speaking of monthly gigs, the next show at Venice Cafe (STL) is this Thursday, May 2. Just 2 bands, rather than the normal 3 this time - I'll be going it solo, and my good friends the Bottoms Up Blues Gang will be joining me. HIGHLY advised that you attend this one. The RFT once said of the BUBG: "If you haven't heard of the BUBG, you're either dead or in jail." You should probably come if you haven't seen 'em - your imminent future does not bode well otherwise, according to local sources! Totally worth the $3 when the RFT makes it seem so damning not to, right?

Designs are in the planning phases for one/some/all these things: buttons, koozies (how do you fucking spell that?!), T-shirts. That is literally all of the news I have, though. Sorry that was so anticlimactic.

Can you believe we used to sign notes in middle school "TTFN"? 12-year-olds do some weird shit, man.

Suzie Cue
Posted by Suzie Cue Music at 4:02 AM No comments:

Hello, my dearest Cuenicorns (that's my name for y'all now). It's spring now, right? Close enough!

It seems like every year around this time, I ended up crappin' out a couple o' new songs - hatching them might be a better metaphor? It's pretty gross, either way. Let's digress from this Circle of Life shit, shall we?

NEW SONGS is really what I'm getting at. If you came to the show at Plush this past Saturday, you saw two new tunes. And there's an even newer song that isn't recorded or ready for a live audience yet, which you've heard veiled references to if you follow me on Facebook. I'd like to introduce you to all 3 of these new tunes. My favorite part about all 3 of these songs is that there's NO GUITAR on any of them. WHOA. Different and stuff.

The first is called "3 Realisations" and I've played it about 3 times live now. It involves a telephone receiver converted into a microphone and a loop pedal. The song is actually about 5 years old, and you can listen to the old recording of it (without all those cool aforementioned things) here.

The next, which I debuted at the Plush show, is (tentatively) called "Type Write To Me." I sing and play my toy piano (named Ramyaj and hand-painted by me a few years ago) that I've owned since early childhood. It's nice to be able to bring the little guy onstage finally - though I've been playing it on a few Drown Fish songs for quite some time now. Anyway, it's a whimsical little waltzy number; I dig it.

And the last one, unheard but spoken of on the Internets, is titled "The Fresh Step." It is one of my Kickstarter reward songs. Those that have frequented my open mics are familiar with the ridiculous beats built in to my keyboard - it uses the most ridiculous one I could find. I also use my "cat keyboard" - a children's toy keyboard that looks and does exactly how/what you think it looks/does. Oh, did I mention it's a RAP SONG? Yeah, it's pretty awful/awesome. I can't wait to make a video!

I'll be playing the first two of these 3 songs at the show at Venice Cafe this Thursday (9 pm; $3) at my monthly mash-up show. I'll be playing first, then Lawrence & The Lion, then Old Capital Square Dance Club. Come and say hi if you're in STL.

The next show will be at Nico in the Delmar Loop on Wednesday, April 24. There's no cover for that one, and Guitardog (a super-group of talented STL area dudes) hosts and will also perform.

Stay in touch, check out the other pages on the site, and come to a show!

Suzie Cue
Posted by Suzie Cue Music at 2:59 AM No comments: